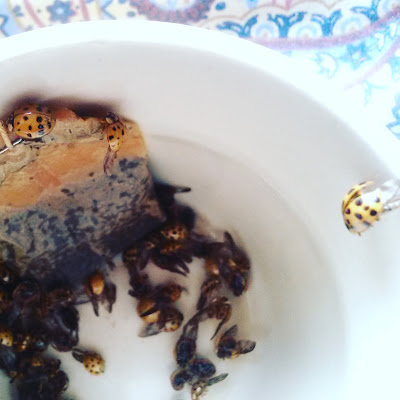 I opened my eyes with an expectation of confusion (a condition that over several years has led to a rather unsightly gathering of the skin just above the ridge of my nose) but was slightly rattled by the relaxed state of my brow that accompanied an astonishing level of self-awareness.  This moment of clarity, however, was short-lived.  When the same child begins following you everywhere you go, you get into the habit of pulling back the shower curtain to ensure privacy when going to the toilet.  Though she usually keeps her distance, I have on occasion found her considering hiding places under my bed or in the hallway closet.

It was early morning.  There was a soft light coming from the wash basin that was bouncing off the narrow mirror that ran the length of the east facing wall, bathing the room in a warm glow.  The smell was familiar...that of mould and rot and Ivory soap.  At $1 for a pack of 20 bars,  we would see years of prolonged use of the stuff in a carpeted bathroom.   On my way to inspect the source of the light I threw back the shower curtain and thought nothing of the dilapidated pram haphazardly hung from the shower head.  I continued to the sink and found a mobile phone, not mine, with the light set to on.  It was the time of year when Asian beetles gathered in numbers,  clumsily finding their way into any exposed crevice of your body and filling any concaved surface like an open grave.  The light of the phone had attracted hundreds through the night.  They are filthy creatures, fornicating on left over teabags and scraps of meat in the bin.  They can give quite the bite so I left them as they were.  A strange noise necessitated a second inspection of the shower.  I had somehow overlooked a nest of wasps that completely engulfed the baby carriage.  I felt dirty...I took in a last short breath and held it.  The soap burned by nose.  I gently closed the door behind me and went to check the hallway closet.