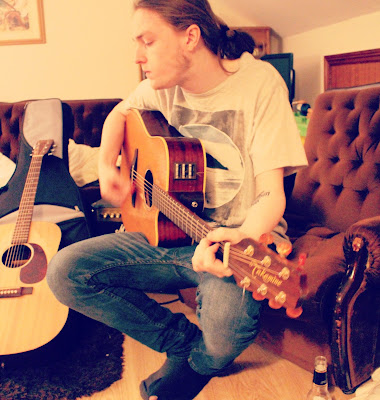 Meet Jack.  In times of love or war, strange and ugly things will happen...

We met on three separate occasions.  On the fourth he thanked me, kissed me on the lips and tackled me off a large piece of furniture we were all perched upon, while Stuart and Blackmore lost themselves in a fit of laughter, feverishly flipping through a compilation of Bob Dylan tracks.  It was our third meeting, however, that I would like to detail.

He and Harry were fresh off the boat, and somehow managed a chance encounter with us at a Spar not far from the cottage where we would all be spending the week. We all chipped in and filled the front seat of his car with 2 cartons of eggs, a bag of potatoes, an assortment of greens and veggies, more milk than we knew what to do with, and enough salt to melt a small iceberg.

He understood what was happening.  I found him upstairs without shoes, a guitar, and an untouched glass of whisky.  He finished his song and after spoke to me of a love and simultaneous scorn for a greed driven world. I remember him pausing, for a brief moment, as he reached for the still glass of warm liquor at his feet.  As he brought it to his lips, he paused again...and smiled.

He was right, of course.  In times of love and war the inside track becomes unclear, and we seek  comfort in rumours and indulgence, denouncing each other publicly while licking the sour flesh of fallen grapefruits.  Do not be fooled by the gospel, yet do not be too proud to not allow it to guide you....And as good as one's word, keep looking for that good-time companion.