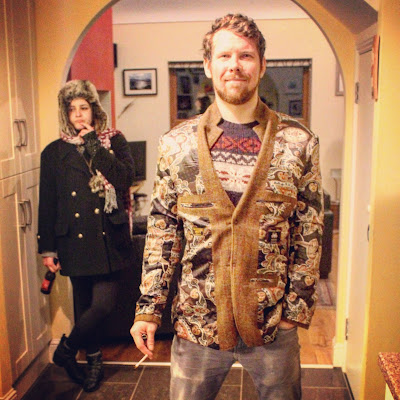 Meet Mark.  He had never had an egg.  Nae poached nae fried nae boiled.  Nae egg.  The morning of the egg run.  The morning Mark Gilberts' life changed forever.  The majority of his life had been lived meat free, and egg free for that matter.  I still have trouble digesting this truth, but a man (a Scottish man) was able to go three decades without the creamy yolk of a chickens pride coating his lips.  Props.

He plays the violin and is the only person I have busked with on the streets of Glasgow.  The first time we performed we were approached by many and offered two gigs, one of which we played later that evening at the old Art School on Sauchiehall and the other a short time after at Citizen M hotel, where we were paid in as much Heineken as our bellies could hold and a free nights stay each.  The lights in the shower periodically changed colour and supposedly there was a free porn channel on the tube.  We did indeed fill our bellies and both scampered off to the Berkeley Suite where he preferred taking quids from underage club goers to store their Primark and H&M hoodies on immaculately spaced plastic hangers while I, luckily, poured beers at the upstairs bar and sipped shots of coconut rum with content, occasionally sneaking a rum and ginger doon the steps into the depths of the most well-kempt cloak room in the UK.