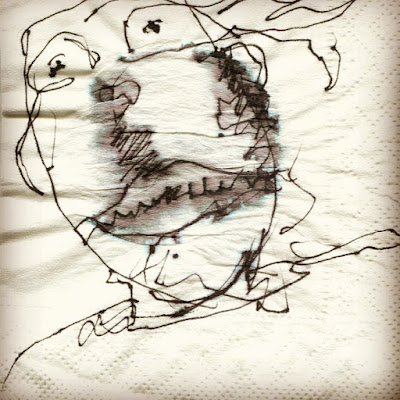 "A handful of pills and a litre of wine would go a long way right about...now."

It was difficult at first, and I showed her a side of my personality I would preferred to have kept at bay.  I wondered what her average salary added up to...far too little I'm sure considering the amount of underage dope fiends en route to Ibiza she dealt with on a daily basis...and not to mention how they frequent the toilet, snorting lines off the spring loaded plastic toilet paper holder and frantically stuffing themselves into their more than reluctant partners.  Walking in on that sort of filth deserves a raise.

Back.  Just in time to watch it all fall.  But I don't know where I was or what I was doing. The weather is changing.  Flies are beginning to swarm, and the plants are beginning to consume themselves.  The music being played is terrible.  Simply terrible.  And it looks like a meth addict was put in charge of the newest addition to the house.

Standards.  Romance is dead, and with it art....but light travels at the speed of itself and I find it rather unfortunate how disinterested some can be.  It is the 7th day of June 2015 and I will soon be in Milan.  I remember the young Turkish man seated next to me had a big smile, smacking gums and an unbearable odour seeping from his mouth.  As I held my breath and listened to him go on about house music and DJ's I had never heard of, I noticed a couple wearing matching Beyonce vests and brightly coloured caps sneaking about in a rather guilty manner...

I again cut my conversation with the Turkish man short, ordered a fifth round and proceeded to the nearest men's room to lick the toilet paper holder.