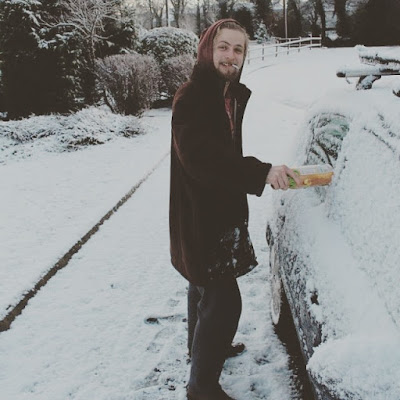 
I woke in confusion and stumbled from my bed into the living room where I was met with several heads of hair, still attached to fully clothed bodies strewn across a beer soaked carpet, softly illuminated by the morning's light.  I avoided them like a child might a spoonful of mashed peas. I was in search for water and soon found a forgotten glass of whisky.  Protective of my newly found prize I snatched it from the kitchen counter and quickly examined the heads of hair for any signs of movement. Nothing. I remember whispering "Jesus" as I raised the filth to my cracked white lips, I closed my eyes and let the caramel nectar race down the neck of the cool glass and into my warm belly.   I opened my eyes again.  That is when I saw her.  She had come in the night while we slept  and I was struck dumb by her beauty.  I stopped.  Everything stopped.

Just the night before, the weather was surprisingly warm and temperate. It was the 12th day of January in Ramelton, Co. Donegal and we had just mixed and mastered Ella. We sat in the back of Jack's car, nobody said a word, and just listened.  Jack played it again and still no body moved or spoke.  We went back inside with smiles and played music and drank whisky until our bodies gave in.  I was the first to rise on the 13th day.  I believe it was the energy we put into Ella that made it happen.   Overnight the landscape had changed and everything had been covered in a thick undisturbed layer of pure white snow.  In awe I made my way back through the field of hair in search of Harry.  I found him at the far end of the cottage in a bed next to Vincent.  I woke him and beckoned him to the window.  The only word we could mutter was "wow" in between girlish fits of laughter.  We had an hour before we had to be at the studio.  So he and I decided on breakfast and took Jack's keys to go on an egg run.  The windows were covered in the white stuff so Harry used the only thing we could find to clean them...a half empty bottle of orange juice.
Newer Post Older Post Home